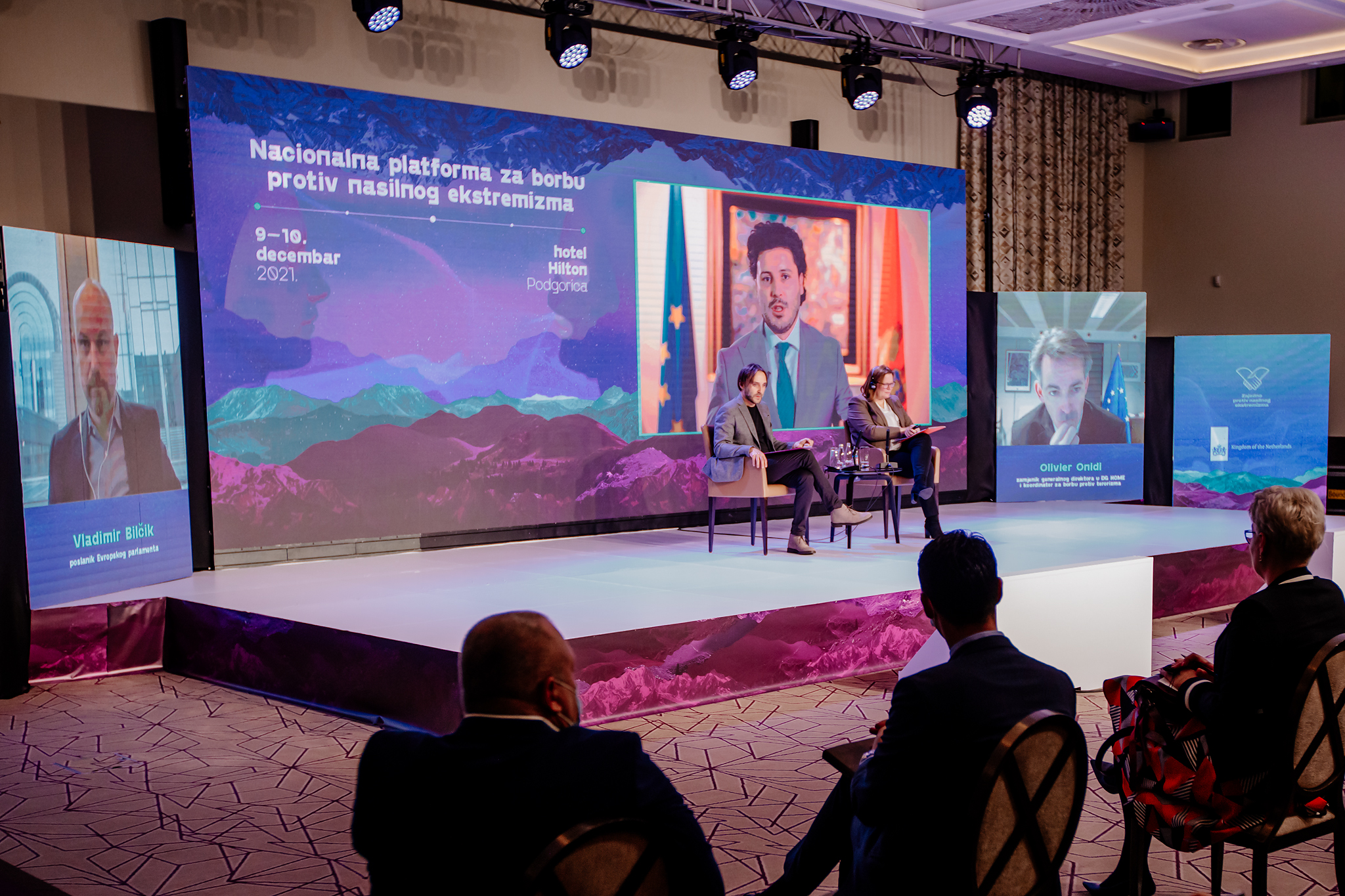 Violent extremism and radicalism are not phenomena pertaining to one religion and ideology. They have become a legitimate way of functioning in Montenegro, and the combat against these phenomena should unite and not divide politicians.

This was one of the messages from the opening of the National Platform for Combating Violent Extremism organized by the Center for Democratic Transition (CDT) in cooperation with the National Operational Team for Combating Violent Extremism, Terrorism, Money Laundering and Terrorist Financing, with the support of the Embassy of the Kingdom of the Netherlands

Executive director of the CDT, Dragan Koprivica, said that this year the platform took place amid the increased volume of radicalization, extremism, and violence in our society.

“Regrettably, the thing that we have been drawing the attention of relevant actors in our society to, for years now, has come true – extremism has become a “legitimate” way of functioning on our social scene and a legitimate way of political struggle for most political options in the country. These options combine nationalist and religious extremism, make it the content of their political views, cultivate it carefully, and activate it whenever they have the political need to do so. At the same time, they express their detest toward extremism, condemn it and appeal to reducing divisions and tensions”, Koprivica said.

It is fairly common in Montenegro, he added, whenever there is a need for tensions and the realization of various political goals to engage extremism and organize crime and “justify” them with national interests and patriotism.

“There are more and more manifestations of religious extremism, which closely cooperates with political extremism. There is a danger that this extremism will turn into fundamentalism, but not Islamic one, which is usually the first association with this concept, but Orthodox one that seeks to control the entire social life, make decisions and act as a veto player in our processes,” he said.

This rather small number of fundamentalists, he stated, compromises all those who are Orthodox and who respect the constitutional separation of church and state, who nurture tolerance towards other religions, those who are not believers, but also towards those who hold different political views.

We are concerned about the weak reaction of the state – NOT wants to work, there are good attempts, but there is no true political will, no unity in government. Extremist currents pervade the government and parliamentary caucuses; there is no true dialogue between the government and opposition on key issues; there is no dialogue between the majority and the opposition leading to an agreement on how to to get out of this situation, so it is very difficult to work and achieve concrete results. We are worried about the spiral of silence that the extremists have skillfully initiated – the best and most progressive in society have been silenced or are silent because they are intimidated by various forms of violence experienced by all those who dared to oppose extremism,” Koprivica said, adding that there is a concern related to the fact that external forces are trying to regulate internal relations in Montenegro.

“…and defining the character of our community, at the same time helping extremism in various ways, the one close to their political goals,” Koprivica said.

Deputy Prime Minister Dritan Abazovic said the government would continue to invest additional efforts to combat all forms of extremism.

“We live in a predominantly polarized society, burdened by a lack of democratic tradition, a bad political culture, in which various types of extremism are often encouraged for the sake of one’s political interests. However, there is a firm determination of the security sector and all services and agencies to treat said global and local problems with adequate attention,” Abazovic said.

The journey toward the creation of a pacifist society, Abazovic added, is a difficult one and must be supported not only by efforts coming from Montenegro but also by means of international cooperation.

He also said that some civil activists and organizations identified certain negative phenomena better than the state did and added that Montenegro was committed to peace and democracy, but that it must make additional efforts and strengthen institutions so that such global phenomena would not affect the quality of life of its citizens.

The European Commission (EC) representative – the Deputy Director-General of the Directorate-General for Migration and Internal Affairs and the coordinator for the fight against terrorism, Olivier Onidi, said that there was not only one religion and ideology that stood behind radical individuals

“We have to look at all ideologies and all forms of radicalization. “We have to be focused on Islamism and jihadism because of foreign fighters, but we see more and more that other ideologies are being used to provoke acts of violence, from the extreme left to the extreme right,” Onidi said.

New forms of radicalization, he added, must be recognized. “We must oppose them. The work must be intensified, especially in the aspect of rehabilitation. We must make an effort to avoid recidivism in individuals convicted of terrorist acts who completed their prison sentences. We have an obligation to step up our efforts to better understand how to reintegrate these individuals into society,” Onidi said.

He pointed out that efforts must be intensified in detecting and responding to the material on the Internet that leads to radicalization and extremism. “We need to investigate radicalization online,” the EC representative said.

“We have seen, over the years, many positive results of the National platform. I am pleased that NOT is an active member of the European family of similar bodies that fight against violent extremism. We particularly like the slogan that guides your platform – “Together against extremism” because you have recognized that fighting radicalization is much more than helping law enforcement and the intelligence community. If we want to look at the root causes and if we want to make a difference, it means that one needs to engage quite a comprehensive family of representatives of society, from healthcare workers to prison managers, to families etc. your platform has brought these forces together to make a difference. Your platform has been instrumental in binding other countries in the region and bringing those under European network in order to prevent individuals from becoming violent extremists,” Onidi said.

Member of the European Parliament (EP) and co-chair of the Stabilization and Association Parliamentary Committee (SACP), Vladimir Bilcik, said the fight against those who want to undermine democratic institutions is not a fight that should divide politicians but instead unite them. “You may be socialist, liberal, green, there are certain issues around which we are united, and which serve as protection of our societies in the fight against extremism, hatred, violence,” Bilcik pointed out.

The strength of institutions, including the fight against corruption, Bilcik added, gives politicians and citizens the power to face such threats.

“The fight against extremism goes hand in hand with the unification of society, which pushes the country on the European path,” he added.

EU institutions, as he stated, have been trying to help as much as possible. “We are sending clear messages, direct and open help through cooperation in the fight against manipulative disinformation, online and offline,” Bilcik said, reminding everyone that the media landscape in Montenegro is polarized.

“Montenegro is facing the challenge of improving the quality, independence and freedom of journalists, which is fundamental in countering extremism,” Bilcik said, adding that extremism could be a real-time problem.

“We could see that after the elections mi the attacks in Pljevlja and the messages in Berane and Niksic,” he said.

He also expressed concern over the situation in the Balkans. “We are also discussing our contribution to the fight against hatred and extremism, both online and offline. European future, values ​​and institutions are the best answer for developing resilience to these phenomena,” Bilcik concluded.

The Chargé d’Affaires of the Embassy of the Kingdom of the Netherlands, Anne-Sietske Brinks, commended the current and former Government for setting up and utilizing the platform to counter violent extremism. “This requires the teamwork of different actors to help reduce the causes and effect of radicalization and violent extremism. And these are very important topics that affect all our countries, which must not be ignored,” Brinks said.

The factors that lead individuals to turn to radicalization and violence, she said, can be different. “And that may have something to do with being influenced by certain ideologies, but also potential social exclusion and marginalization. Racism, poverty, unemployment, lack of education – all these elements can lead individuals to question their social, national and ethnic identities. That is why I believe that radicalization begins with polarization,” she said.

She pointed out that the political level is important in everything. “Great responsibility lies with those in power. What public figures say has an impact on what people perceive to be true; it has an impact on the ability to mobilize people,” Brinks concluded. 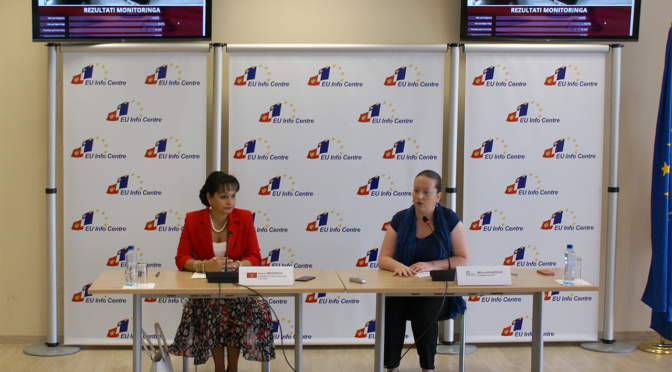